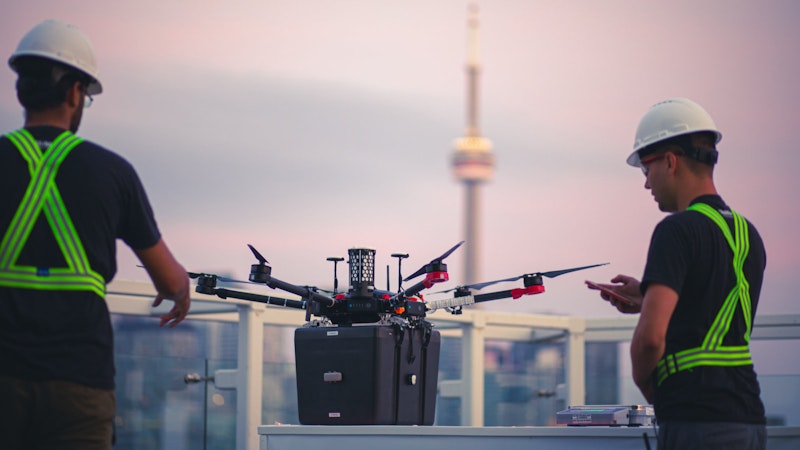 Unither Bioelectronics has set its sights on transforming the way we think of transplantable organ transportation, either donor organs or manufactured organs. In September 2021, in a proof-of-concept flight, the company transferred donor lungs for transplant between two hospitals using its proprietary aerial drone organ transportation technologies.
The few minutes' flight, from Toronto Western Hospital to Toronto General Hospital, was the first time a lung has been delivered via drone anywhere in the world. This innovation in the transportation of organs has the potential to significantly increase the transfer efficiency between donors and recipients, especially in congested urban areas.
These flights are also symbolic as the first single and double lung transplants in the world occurred at Toronto General Hospital, and Unither's parent company United Therapeutics has a track record of developing medicines and technologies specifically targeting end-stage lung disease and organ manufacturing. The technology inherent in this effort is not a small feat and represents significant effort of development and investment at the intersection of medicine and aviation. For further information see the IDTechEx report on Drone Market and Industries 2021-2041.
The Unither Organ Delivery Systems research & development program started several years ago as a conversation between Martine Rothblatt, CEO of United Therapeutics and Mikaël Cardinal, VP, Program Management, Organ Delivery Systems at Unither. After two years of research and development (and a pandemic!), one of many moonshots became a real-life earthshot as Mikaël and his team of drone specialists at Unither were able to bring this ground-breaking technology to fruition and save an actual human life.
Unither's first achievement in saving lives happened in September 2021 with a set of lungs for transplant being safely carried by their drone between two hospitals in Toronto, Canada. The flight demonstrated that a life-saving organ can be safely and quickly flown via drone over a high-density urban setting and highly congested traffic area, maintaining the right conditions for the organ, while successfully interfacing and coordinating with a medical transplant team, in this case, Toronto General Hospital's world-renowned lung transplant team led by Dr. Shaf Keshavjee.
"Our other aviation strategy at United Therapeutics is to extend the range of drone aircraft. We are now building drones that can fly 100 miles, and then 200 miles. Ultimately, we plan to have droned aircraft deliver lungs, hearts, and kidneys throughout all of North America." said Martine Rothblatt, PhD - CEO of United Therapeutics.
While a proof-of-concept, the success of this project establishes solid ground work for organ delivery in an urban setup and paves the way for semi-autonomous "Beyond-Visual Line-Of-Sight" organ delivery in complex environments. This project is an important steppingstone for future organ delivery that ultimately will open the door for large-scale adoption of larger fully autonomous, electrically-powered, environmentally-friendly drones that have the ability to efficiently and cleanly deliver organs for transplant across trans-continental distances.
At the health system level, the use of drones for organ transportation will ultimately bring important advantages to improve the availability and effective distribution of scarce life-saving organs for transplantation. With this unique technology we may one day be able to transport organs with fewer logistical barriers and eliminate the need to transport whole surgical teams in larger aircrafts. Simply put, drones may help organs for transplants get to the people who need them, quicker and in a more cost-effective way.
"This is a major stepping stone both from an aviation perspective and a healthcare perspective. I hope that six months, one year down the line, I'd be able to meet the patient and see them in good health, enjoying life," said Mikaël Cardinal - VP, Program Management - Organ Delivery Systems at Unither Bioelectronic.
This historic achievement would not have been possible without the contributions of Canada's University Health Network, Toronto General Hospital's world-renowned Ajmera Transplant Centre and UHN's Surgeon-in-Chief and Director of the Toronto Lung Transplant Program, Dr. Shaf Keshavjee, Ontario Health (Trillium Gift of Life Network) and, most importantly, the generosity of the organ donor and their family along with the organ recipient.
"Flying a lung for the first time by drone is really history in the making - and that is the success - that it's possible. This has opened the door to make this the standard of patient care down the road," said Dr Shaf Keshavjee - UHN's Surgeon-in-Chief and Director of the Toronto Lung Transplant Program.
By the end of this decade, Unither Bioelectronics are looking to see long-range drones and optionally piloted electric vertical takeoff and landing (eVTOL) aircrafts be delivering thousands of organs to transplant hospitals across North America. The company is currently working on innovations to solve for scalability, transportation logistics, and environmental benefits, among other considerations. With the emerging availability of manufactured organs such as 3D-bioprinted lungs - being developed by United Therapeutics - drone technology capability and innovation will become especially important and have potential to greatly impact the quality and efficiency of services to the growing number of patients on waiting lists.
Source and top image: Unither Bioelectronics