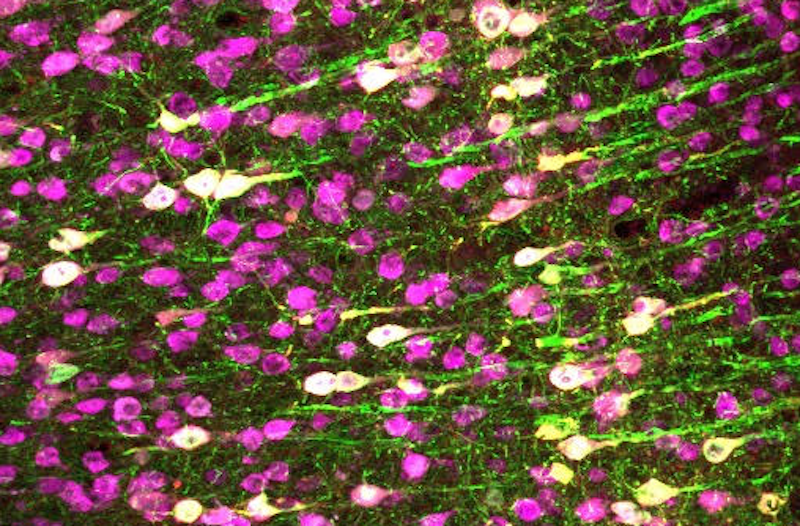 Salk scientists have engineered mammalian cells to be activated using ultrasound. The method, which the team used to activate human cells in a dish and brain cells inside living mice, paves the way toward non-invasive versions of deep brain stimulation, pacemakers and insulin pumps. The findings were published in Nature Communications on February 9, 2022.
"Going wireless is the future for just about everything," says senior author Sreekanth Chalasani, an associate professor in Salk's Molecular Neurobiology Laboratory. "We already know that ultrasound is safe, and that it can go through bone, muscle and other tissues, making it the ultimate tool for manipulating cells deep in the body."
About a decade ago, Chalasani pioneered the idea of using ultrasonic waves to stimulate specific groups of genetically marked cells, and coined the term "sonogenetics" to describe it. In 2015, his group showed that, in the roundworm Caenorhabditis elegans, a protein called TRP-4 makes cells sensitive to low-frequency ultrasound. When the researchers added TRP-4 to C. elegans neurons that didn't usually have it, they could activate these cells with a burst of ultrasound—the same sound waves used in medical sonograms. For further information see the IDTechEx report on Bioelectronic Medicine 2019-2029.
When the researchers tried adding TRP-4 to mammalian cells, however, the protein was not able to make the cells respond to ultrasound. A few mammalian proteins were reported to be ultrasound-sensitive, but none seemed ideal for clinical use. So Chalasani and his colleagues set out to search for a new mammalian protein that made cells highly ultrasound sensitive at 7 MHz, considered an optimal and safe frequency.
"Our approach was different than previous screens because we set out to look for ultrasound-sensitive channels in a comprehensive way," says Yusuf Tufail, a former project scientist at Salk and a co-first author of the new paper.
The researchers added hundreds of different proteins, one at a time, to a common human research cell line (HEK), which does not usually respond to ultrasound. Then, they put each cell culture under a setup that let them monitor changes to the cells upon ultrasound stimulation.
After screening proteins for more than a year, and working their way through nearly 300 candidates, the scientists finally found one that made the HEK cells sensitive to the 7 MHz ultrasound frequency. TRPA1, a channel protein, was known to let cells respond to the presence of noxious compounds and to activate a range of cells in the human body, including brain and heart cells. But Chalasani's team discovered that the channel also opened in response to ultrasound in HEK cells.
"We were really surprised," says co-first author of the paper Marc Duque, a Salk exchange student. "TRPA1 has been well-studied in the literature but hasn't been described as a classical mechanosensitive protein that you'd expect to respond to ultrasound."
To test whether the channel could activate other cell types in response to ultrasound, the team used a gene therapy approach to add the genes for human TRPA1 to a specific group of neurons in the brains of living mice. When they then administered ultrasound to the mice, only the neurons with the TRPA1 genes were activated.
Clinicians treating conditions including Parkinson's disease and epilepsy currently use deep brain stimulation, which involves surgically implanting electrodes in the brain, to activate certain subsets of neurons. Chalasani says that sonogenetics could one day replace this approach—the next step would be developing a gene therapy delivery method that can cross the blood-brain barrier, something that is already being studied.
Perhaps sooner, he says, sonogenetics could be used to activate cells in the heart, as a kind of pacemaker that requires no implantation. "Gene delivery techniques already exist for getting a new gene—such as TRPA1—into the human heart," Chalasani says. "If we can then use an external ultrasound device to activate those cells, that could really revolutionize pacemakers."
For now, his team is carrying out more basic work on exactly how TRPA1 senses ultrasound. "In order to make this finding more useful for future research and clinical applications, we hope to determine exactly what parts of TRPA1 contribute to its ultrasound sensitivity and tweak them to enhance this sensitivity," says Corinne Lee-Kubli, a co-first author of the paper and former postdoctoral fellow at Salk.
They also plan to carry out another screen for ultrasound sensitive proteins—this time looking for proteins that can inhibit, or shut off, a cell's activity in response to ultrasound.
Source and top image: Salk Institute