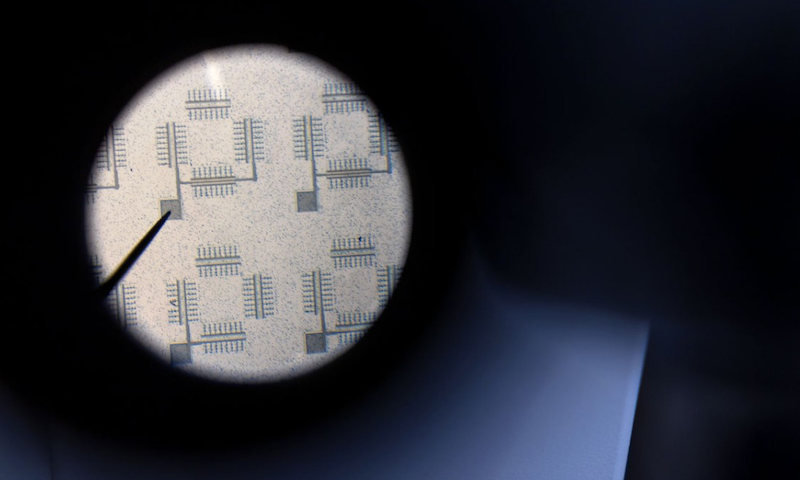 Cilia are the body's diligent ushers. These microscopic hairs, which move fluid by rhythmic beating, are responsible for pushing cerebrospinal fluid in your brain, clearing the phlegm and dirt from your lungs, and keeping other organs and tissues clean. A technical marvel, cilia have proved difficult to reproduce in engineering applications, especially at the microscale.
Cornell researchers have now designed a micro-sized artificial cilial system using platinum-based components that can control the movement of fluids at such a scale. The technology could someday enable low-cost, portable diagnostic devices for testing blood samples, manipulating cells or assisting in microfabrication processes. The group's paper, "Cilia Metasurfaces for Electronically Programmable Microfluidic Manipulation," published May 25 in Nature. The lead author is doctoral student Wei Wang.
"There are lots of ways to make artificial cilia that respond to light, magnetic or electrostatic forces," Wang said. "But we are the first to use our new nano actuator to demonstrate artificial cilia that are individually controlled."
The project, led by the paper's senior author, Itai Cohen, professor of physics in the College of Arts and Sciences, builds off a platinum-based, electrically-powered actuator - the part of the device that moves - his group previously created to enable microscopic robots to walk. The mechanics of those bending bot legs is similar, but the cilia system's function and applications are different, and quite flexible. For further information see the IDTechEx report on Synthetic Biology 2018.
"What we're showing here," Cohen said, "is that once you can individually address these cilia, you can manipulate the flows in any way you want. You can create multiple separate trajectories, you can create circular flow, you can create transport, or flows that split up into two paths and then recombine. You can get flow lines in three dimensions. Anything is possible."
"It's been very hard to use existing platforms to create cilia that are small, work in water, are electrically addressable and can be integrated with interesting electronics," Cohen said. "This system solves these problems. And with this kind of platform, we're hoping to develop the next wave of microfluid manipulation devices."
A typical device consists of a chip that contains 16 square units with 8 cilia arrays per unit, and 8 cilia per array, with each cilium about 50 micrometers long, resulting in a "carpet" of about a thousand artificial cilia. As the voltage on each cilium oscillates, its surface oxidizes and reduces periodically, which makes the cilium bend back and forth, allowing it to pump fluid at tens of microns per second. Different arrays can be activated independently, therefore creating an endless combination of flow patterns mimicing the flexibility observed in their biological counterparts.
As a bonus, the team created a cilia device that is equipped with a complementary metal-oxide-semiconductor (CMOS) clock circuit - essentially an electronic "brain" that allows the cilia to operate without being tethered to a conventional computer system. That opens the door to developing a host of low-cost diagnostic tests that could be performed in the field.
"You can imagine in the future, people taking this tiny centimeter-by-centimeter device, putting a drop of blood on it and conducting all the assays," Cohen said. "You wouldn't have to have a fancy pump, you wouldn't have to have any equipment, you would just literally put it under sunlight and it would work. It could cost on the order of $1 to $10."
Source and top image: Cornell University